With the end of The Ghost Smuggler in striking distance and the temperature in Vancouver dropping, I decided to take today off from my day job and make it…a writing day. I’ll be locking myself in my office and hammering out words for most of the day. It’s a holiday weekend in BC as well and we have no plans apart from 42km of running. All of which means I’ve got four straight days available to write so this is going to officially be a “writing weekend”. I don’t think that’s enough to completely finish the first draft. I may get to “The End” but there are a couple of chapters I want to rework and I’m pretty sure there’s a hole somewhere that means the book won’t make sense to anyone but me. I want to get those fixed before I declare the first draft complete and put it in a virtual drawer to cool off before I start revising it. The day has already got off to a good start. I woke up early (as usual) and lay in bed for an hour or so, mulling over plot points and scenes and characters. I ended up with some nice … END_OF_DOCUMENT_TOKEN_TO_BE_REPLACED

Today is the first day of Carrie Cuinn’s Better Writing Through Brevity workshop. I’ve taken a couple of online workshops before and got a lot out of them so I figured I’d give this one a shot. From Carrie’s introductory email: “When you can write succinct yet powerful short fiction in 140 characters, 100 words, 500, or 1000, you’ll be able to share more information with your readers in a smaller space. You can carry that into your longer fiction so that at short story- or even novel-length, you’re not wasting words. You’ll learn what to cut, what to keep, and what to expand when you don’t have space to spare.” The workshop forums have been up for a few days now and it looks like there’s an interesting mix of fun people so I’m looking forward to seeing what we can all come up with. I think there’s still time to sign up if you’re interested, you can find more details and a link to join the workshop on Carrie’s website. It’s been a while since I posted any fiction here so I may post some of the pieces I write as part of the workshop. [Better Writing Through … END_OF_DOCUMENT_TOKEN_TO_BE_REPLACED

Last week, I added just over 5,000 words to The Ghost Smuggler although I cut a few bits out as well so the total word count didn’t increase by quite that much. That’s a good writing week for me, very good if you consider how much running I’m doing at the moment. Yesterday’s writing session was particularly good, thanks to a series of happy coincidences. I’m using my Chromebook for a lot of my writing at the moment, which means I’m working in Google Docs. Google Docs can’t handle a full 60,000+ word document so every few days I cut and paste what I’ve written into my main Word document and trim back the Google Docs file to the last couple of paragraphs. That’s what I did on Sunday morning but for some reason (happy coincidence number one) I kept the whole chapter, rather than just the tail end. When I sat down to write, rather than just picking up where I’d left off like I normally do, I went back to the beginning of the chapter and started tweaking a few words here and there (happy coincidence number two). A few pages into this particular chapter there’s a transition point where the … END_OF_DOCUMENT_TOKEN_TO_BE_REPLACED

If you’re not reading Chuck Wendig’s blog, terribleminds, you should be, especially if you’re a writer or would like to be one. Because: He’s smart He’s funny He posts things like this. His books are pretty damn good as well. [O Wendig by Philip Harris first appeared on Solitary Mindset on 24 July 2013]

It’s been a busy few days. On Thursday and Friday I took part in a two day offsite (basically a really long meeting where we talk about strategic company stuff). It played havoc with my writing schedule but on Thursday evening we were treated to a visit from  retired NHL player, Trevor Linden. Linden played for the Vancouver Canucks and is probably their most loved player. He’s renowned for being an all round great guy and true to form he was very friendly, happily signing autographs and chatting with us after his speech. Saturday was race day. I took part in the 25th Annual Summerfast 10k race around Stanley Park. Ann wasn’t running, she ran a solo race last weekend, so I was on my own for this one. It was a fantastic event with beautiful clear skies and a great atmosphere. There’s a cap of 500 runners for the race so it’s relatively small. I started a little bit too far back in the pack so it was somewhat crowded and the pace was slower than I’d have liked during the early part of the race but from 2km onwards the field had spread out and I was able … END_OF_DOCUMENT_TOKEN_TO_BE_REPLACED

Wow. It’s been almost two months since my last real post. Doesn’t time fly. What have I done during that time? Well, let’s see. Besides neglecting my blog, I have (in no particular order)… Spent a very enjoyable evening with fellow eHorror author Rob Boffard and his girlfriend Watched a bunch of films including Star Trek Into Darkness (good), World War Z (good) and Resident Evil: Retribution (the less said the better) Watched Hannibal (excellent), Under the Dome (meh) and the first two seasons of Game of Thrones (excellent – yes, I know, I’ve been slacking) Watched a production of Avenue Q (fantastic) Watched the B-52s play live (excellent) Read Joe Hill’s NOS4A2 (excellent) Read In the Broken Birdcage of Kathleen Fair by Cate Gardner (also excellent) Read Neil Gaiman’s The Ocean at the End of the Lane (excellent) Read The Blue Blazes by Chuck Wendig (very good) Started rereading one of my favourite horror novels – Cabal by Clive Barker (still excellent) Bought far too many books (excellent) Including the Humble eBook Bundle II Read some very excellent blog posts Listened to Tom Dickins’ and the Punintentionals new album about two hundred times (excellent) Snagged tickets to Neil Gaiman, Peter Murphy and John Cleese … END_OF_DOCUMENT_TOKEN_TO_BE_REPLACED 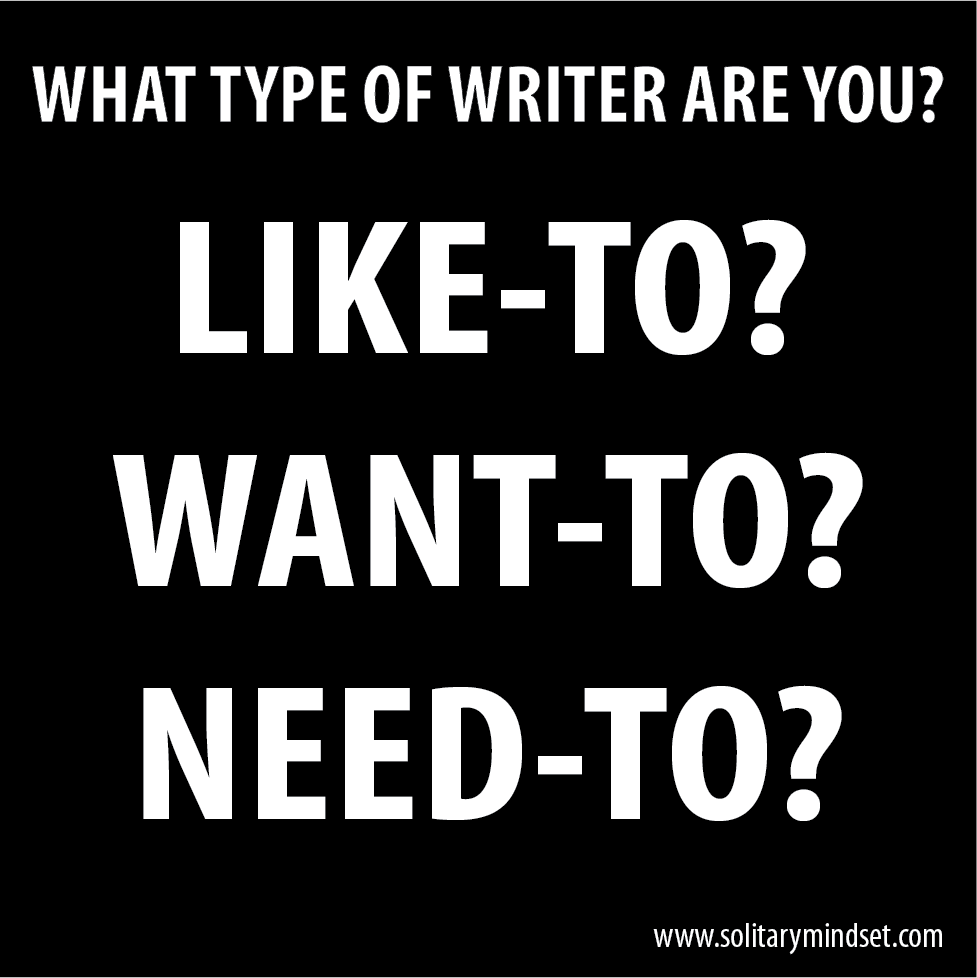 There are three types of writer (or musician or singer or actor or insert-creative-job-of-your-choice). The first type are the people who would like-to be a writer. These are the people who’ve got a great idea for a novel and they just know they’ve got the talent. These are the people who can see themselves spending a few minutes at the beginning of each day dashing out a couple of thousand words of their next bestseller and then sitting around, soaking up the sun at their lake house while inspiration strikes and the royalty cheques roll in. These are the people who would love seeing their books on shelves in their local bookstore and giving readings to hundreds of adoring fans and going to exotic launch parties and giving interviews to the New York Times and Oprah. Of course, they don’t quite have the time to write their book at the moment, but they like the idea of being a writer. Maybe next year. You haven’t read any books by like-to writers. Next, you have the people who want-to be a writer. They know there’s work involved and it won’t be easy, but they figure they’ve got some good ideas and enough talent that with a bit … END_OF_DOCUMENT_TOKEN_TO_BE_REPLACED

I’ve taken a couple of online writing courses and had the original version of my novel, The Ghost Smuggler, critiqued and I’ve learnt a lot from those experiences. I’ve also learnt to trust my instincts. I got a lot of good feedback from those courses and especially from Jeff VanderMeer’s critique and my writing has definitely improved as a result. What I noticed though, was that at least 50% of that feedback related to writing that I wasn’t happy with. There was something missing or something “off” about that part of the story that I couldn’t quite put my finger on. I knew it was weak in some way, I just wasn’t sure why. Or, it was part of the story I didn’t like, I just hadn’t been able to come up with anything better. Having a third party read the story and point out, not only that the writing was weak, but why was invaluable but it also showed that my instincts weren’t completely out of whack. I just needed to persevere and keep refining the story until it worked. Which brings me to The Ghost Smuggler. There’s a point in the novel where our hero gets captured by a bad guy and, … END_OF_DOCUMENT_TOKEN_TO_BE_REPLACED

The snot monkey has packed its bags and is saying its last farewell’s and today is a holiday here in Canada so I decided to try a short 6km run. Ouch. The run itself was fine and we kept a reasonable pace but as soon as we stopped I felt a bit light headed and even now, a couple of hours later, my body is still complaining. There’s less than six weeks to our next Marathon so this is “not a good thing”(tm). Progress on The Ghost Smuggler continues apace (I’ve always wanted to be able to say apace)  – mostly because I’m most of the current chapters are brought over from previous drafts. That said, Ethel the Muse was on fine form at 4am this morning and she’s insisting that I need to weave two characters from early chapters into the final act (actually four characters, but three of them are a related group) and add a sprinkling of technology. No idea how I’m going to do that but it shows that the outline isn’t stopping me from continuing to write like the Simpsons. Oh, and I’ve come to the conclusion that one of the key characters needs to change … END_OF_DOCUMENT_TOKEN_TO_BE_REPLACED

I’ve spent the last four days with a snot monkey living in my head. That’s the only explanation I can think of. I did manage to get a bit of writing done yesterday and added just over 3,500 words to The Ghost Smuggler –  breaking the 10,000 word mark. So far, our hero has woken up drunk in an alley, suffered from several nightmares, rejected and then accepted a job, met a water daemon and paid a visit to a local gangster. Now he’s heading underground. What else? What else? Oh yes, the aforementioned snot monkey has put paid to my Marathon training which is making me nervous. I missed the first of our 32km runs this weekend and given that there’s only six weeks to the race, I really need to be tightening up my training, not slacking off. It would have been hopeless though I was interviewing a job candidate today and I thought I was going to drown in the snot monkey’s handiwork. Tonight, I’m going to be submitting a couple of stories to the excellent Fireside Magazine and then I think I’ll retreat to bed with my Kindle in an attempt to shake off the monkey (and avoid … END_OF_DOCUMENT_TOKEN_TO_BE_REPLACED