There’s a long tradition of goth bands writing songs that use a one word female name for the title – Laura, Marian, Alice and Christine to name some of my favourites. I doubt Peter Murphy would class his solo work as goth but the audiences at his gigs quite often fit that label. Either way, his latest album, Lion, includes this track – Eliza – and the sad old goth inside me approves. [Eliza – Peter Murphy by Philip Harris first appeared on Solitary Mindset on 23rd July 2014]

We wrapped up our vacation last night by going to see Peter Murphy play at the Rickshaw Theatre. Given that we were still tired after our late arrival home and weren’t planning on hanging out at the front of the stage we aimed to arrive after the doors opened. It was a good job we did because for some reason the sound check had been delayed and even though we got there fifteen minutes after the club was scheduled to open, the doors were still firmly locked. There wasn’t a big queue though and despite our tardiness we managed to get a prime location. The Richshaw has a dance floor plus cinema style seating and we were dead centre of the fourth row. The delayed sound check was obviously causing problems and the support band, Ringo Deathstarr, suffered from a pretty poor mix but still we weren’t overly impressed. That said, at least one person bought their CD and there were some flashes of goodness so I’ll probably check them out on iTunes anyway. It took a while to get the sound ready for Peter Murphy’s set and as I sat there, sucking on a Werther’s Original, earplugs in my pocket, wondering how late the gig would … END_OF_DOCUMENT_TOKEN_TO_BE_REPLACED

I Am My Own Name – one of the tracks from Peter Murphy’s new album, Lion.   Pretty good but this is still my favourite of his solo tracks:   Beautiful stuff. [Peter Murphy – I Am My Own Name by Philip Harris first appeared on Solitary Mindset on 29th May 2014]

It’s been a busy few days. On Thursday and Friday I took part in a two day offsite (basically a really long meeting where we talk about strategic company stuff). It played havoc with my writing schedule but on Thursday evening we were treated to a visit from  retired NHL player, Trevor Linden. Linden played for the Vancouver Canucks and is probably their most loved player. He’s renowned for being an all round great guy and true to form he was very friendly, happily signing autographs and chatting with us after his speech. Saturday was race day. I took part in the 25th Annual Summerfast 10k race around Stanley Park. Ann wasn’t running, she ran a solo race last weekend, so I was on my own for this one. It was a fantastic event with beautiful clear skies and a great atmosphere. There’s a cap of 500 runners for the race so it’s relatively small. I started a little bit too far back in the pack so it was somewhat crowded and the pace was slower than I’d have liked during the early part of the race but from 2km onwards the field had spread out and I was able … END_OF_DOCUMENT_TOKEN_TO_BE_REPLACED 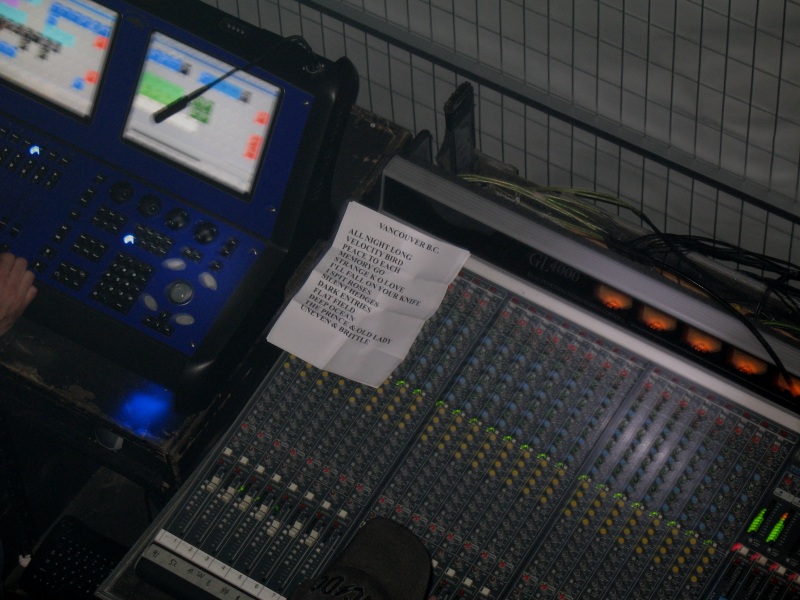 At some point this blog will stop being about events I’ve attended. But not today. I got into Goth music by accident in my late teens and it quickly became the soundtrack to my life and although I have somewhat more varied tastes these days, Goth is still where my heart is. Bauhaus –  one of the first British goth bands – were a key part of that soundtrack and although they split up years ago, I’ve been lucky enough to see them on a couple of reunion tours and still listen to their music. So, when I heard that Bauhaus lead singer, Peter Murphy was coming to town, along with LA based She Wants Revenge I had to go. She Wants Revenge set list The evening was actually a double headliner show with She Wants Revenge also playing pretty much a full set. I’ve seen them in Vancouver before and liked them enough to buy both their albums. They’ve got a bit of a British Goth feel to them that appeals to me and I’m obviously not alone – they had a lot of very vocal fans in the audience last night and it was a great start to the evening. They mixed in some … END_OF_DOCUMENT_TOKEN_TO_BE_REPLACED