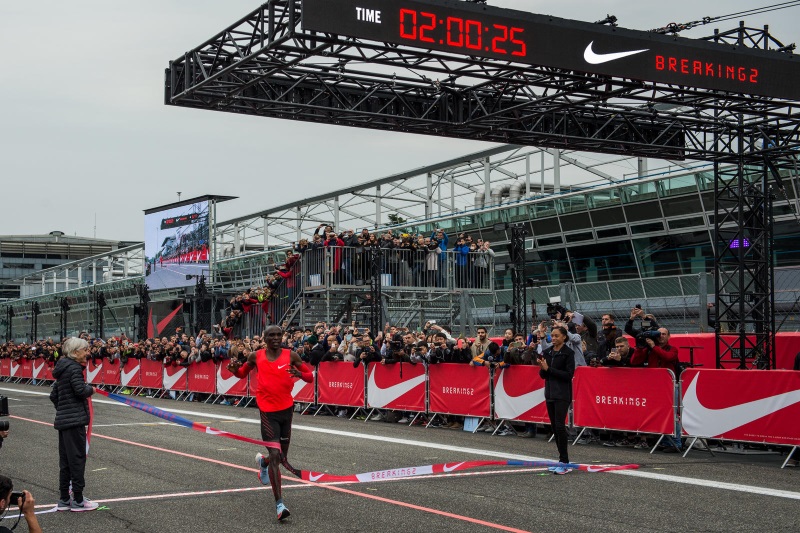 On Friday, my wife and I stayed up late to watch Nike’s attempt to break the 2 hour barrier for the marathon. It was an exciting couple of hours and although the attempt ultimately “failed” I found the whole thing very inspiring, especially going into race weekend for the Vancouver Marathon. Internet reaction to the attempt was (unsurprisingly) mixed, and I was going to post my thoughts but fellow speculative fiction author, Bill Dowis, summed up how I feel much more succinctly so I’m just going to point you here – http://www.billdowis.com/2017/05/08/breaking2-was-not-about-running-a-marathon/.   Out Now [Breaking 2 by Philip Harris first appeared on Solitary Mindset on 8th May 2017]

When we left our hero, he’d travelled to Seattle, spent four hours in a line to get his bib and book vandalised by The Onion and become one of the last people to watch Dawn of the Planet of the Apes in the cinema. When I was training for my first marathon, I was given some advice for the final days before a race – “Don’t stand when you can lean. Don’t lean when you can sit. Don’t sit when you can lie down.” Basically, you want to rest as much as possible for a couple of days before the race. So, spending the Friday before a race standing in a queue and the Saturday morning wandering aimlessly around the Seattle waterfront was not the best way to prepare for race day. Saturday started with us tracking down breakfast at Le Panier – A Very French Bakery near Pike Place Market. It was recommended to us by one of our fellow marathon runners (a Saturday runner whose marathon bib number was 1!) and proved a perfect place for breakfast. The apricot croissant and pain au chocolat I had were both delicious, the bread looked and smelled equally good and the prices were excellent. If you’re in … END_OF_DOCUMENT_TOKEN_TO_BE_REPLACED

It turns out I took part in two marathons last weekend. The first was the four hours I spent queueing to meet Matthew Inman, better known as The Oatmeal. He’s the mastermind behind this fantastic comic on running and the associated book – The Terrible and Wonderful Reasons Why I Run Long Distances. He was at Road Runner Sports in Green Lake on Friday drawing sketches and signing autographs. By a bizarre coincidence, that was also the pick-up location for race packages for the Beat the Blerch races taking place at the weekend. Beat the Blerch sold out in twenty minutes but I was just about quick enough to snag an entry to the marathon – my sixth marathon and the first I’ve run outside of Canada. We decided to take advantage of the race to spend some more time in Seattle so went down early on Thursday and stayed until Monday evening. We took the train down from Vancouver to Seattle – partly because we hadn’t been on a Canadian train yet and partly because it’s a bit more relaxing than the bus. It’s also an early start – we arrived at the station at about 5:15 to get our seats and make sure we got through customs … END_OF_DOCUMENT_TOKEN_TO_BE_REPLACED

If technology and my race preparation align, I should just be starting the Beat the Blerch Marathon in Carnation, Washington as this post goes live. This is my second marathon of the year, the other being the Vancouver Marathon in May. The original plan was to run four marathons this year but I had to drop out of the Bahamas Marathon due to injury and dropped down to the Banff Half Marathon so that I could run with my wife who was injured for that race. I’m running this one on my own, my wife wasn’t able to register – it sold out in about 20 minutes. It should be an interesting race. For the runners out there you can see the route here. I made a fundamental error at the BMO race – I started out aiming to finish in under four hours and it cost me a personal best. Had I aimed for four hours fifteen minutes, I probably would have come in under that. This time I’m going to try to be a bit smarter and aim for a slower pace until the turn around point and then assess where I am. I’m also going to make a concerted effort to do better with my … END_OF_DOCUMENT_TOKEN_TO_BE_REPLACED

It’s been a while since I mentioned running here so I thought I’d rectify that. As of today, there’s two weeks to go before my next race – the Beat the Blerch Marathon in Carnation, Washington. This race is pretty unique in that it’s being organised by Matthew Inman, the artist behind The Oatmeal site. It turns out he is a pretty serious runner and after the success of this comic decided to stage his own race. It sold out in about 20 minutes and although I managed to get an entry, my wife didn’t. But, as she’s injured, she wouldn’t have been able to race anyway. Instead, she’ll be my pit crew. The event was so popular that Inman added another set of races on the Saturday. Hopefully, that will go well and set things up for the Sunday when I’m racing. The race has a bit of an Oatmeal twist to it (as well as some fantastic merchandise). Every race has “aid stations” along the course, usually every mile or two. The stations provide water and nutrition to runners to help them get through the race. Usually, races have specialist gels and drinks and the Blerch races do too. There will also be Nutella … END_OF_DOCUMENT_TOKEN_TO_BE_REPLACED

Four seconds. That’s all I would have had to find somewhere on the Vancouver Marathon course to beat my personal best of 4:18:25 for the full marathon. Dammit. Still, I did cut a generous 19 minutes 26 seconds off of last year’s time. This was the first marathon I’ve run on my own (my wife also ran but she’s a lot quicker than I am and started in a different wave) so I was looking forward to seeing how I fared without anyone else running alongside me. It was a grey, wet day which was actually a lot better than last year when it was fairly warm. It did make the choice of clothing difficult until I remembered I had a very light running waistcoat thingy that I bought at the 2010 Victoria Marathon and have barely worn so I went with that and a short sleeved running shirt. It turned out to be a wise choice, it drizzled most of the race and in places it was pretty cold. The climb up Burrard Bridge was particularly gruesome. Overall the race was good but I decided to try for a four hour pace and it cost me at the end. I hit the halfway mark just under 2 hours and … END_OF_DOCUMENT_TOKEN_TO_BE_REPLACED

In seven days time, I will be running the BMO Vancouver Marathon. It will be my fifth marathon and the third time I’ve run the Vancouver course but I have no idea how it’s going to go. I’m confident I’ll finish but beyond that…it’s anyone’s guess. My first Vancouver Marathon was also my first ever marathon and I was woefully unprepared but I knew I was unprepared. I’d injured my foot during training and missed about six weeks of training – the most important six weeks. As a result, the race was tough. By the time I hit the 28km mark I felt pretty ill and the last 10km or so was a nightmare. I ended up finishing in 5 hours 29 minutes. Last year’s Vancouver Marathon was much better, I made it through the training in one piece and despite it being pretty hot I finished in 4 hours 37 minutes. I also ran the Victoria Marathon in 2012 and 2013. My best time so far is 4 hours 18 minutes in that second Victoria marathon. Everything was going well last year, I set a new personal best for the half marathon in November and was looking forward to running the Bahamas Marathon in January. Then I injured … END_OF_DOCUMENT_TOKEN_TO_BE_REPLACED

I took this photo of one of the dancers in a Junkanoo band at The Bahamas Marathon in January of this year. [Photo – Junkanoo Dancer by Philip Harris first appeared on Solitary Mindset on 16th April 2014]

Only four sleeps to go until my wife and I run our second Victoria Marathon. Last year, my time was 4:41:24. It was a warm day, I got pretty dehydrated and the last 12km was tough but at the time that was a personal best. I ran slightly quicker at the Vancouver Marathon (4:37:54) this year and I’m hoping I can improve again in Victoria. For this race we’ve been training using the Hansons Marathon Method. It differs from our normal training regime in two important respects. You train six times a week instead of five Although the overall weekly mileage is higher and most of the daily runs are longer than we’re used to, the long runs are shorter (up to 26km rather than 32km). The idea is that by running more you’re training on tired legs and preparing your body for what it’s really going to feel like when you hit the 32km mark on race day We’ve been following the program for eighteen weeks to prepare for the race and subjectively it seems to be working. We run across the Burrard Bridge a lot and over the last couple of weeks that climb has seemed a lot easier. But … END_OF_DOCUMENT_TOKEN_TO_BE_REPLACED

The first goal for marathon runners is finishing the race in one piece. The second is to get a new personal best time. Most people will also have a goal time (the one they talk about) and their dream time that they don’t mention but secretly hope they’ll hit. In the case of last weekend’s Vancouver Marathon we hit the first two but didn’t make our goal time of sub 4:30 or our targeted pace of 4:15. I wasn’t too disappointed though, it was the hottest Vancouver Marathon in the 42 years it’s been held. I was woefully under trained for last year’s race (our time was just under 5:30) and I knew I’d done a better job this year but I still wasn’t convinced I’d been as disciplined as I should have (which reminds me I need to put together some graphs of my overall training distance so that I can get a feel for that). On paper, given our 10km and half marathon race pace and the various aerobic and lactate threshold tests I’ve done, I should be capable of a sub four hour marathon. In reality, that seems like a pretty tall order but I was confident … END_OF_DOCUMENT_TOKEN_TO_BE_REPLACED