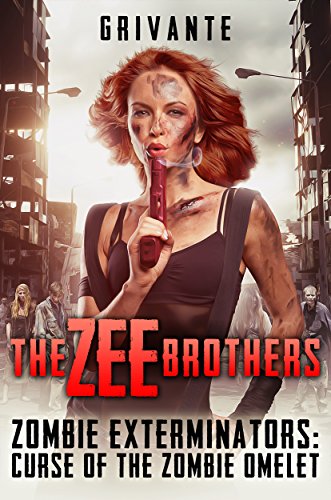 To celebrate the launch of Serial Killer Z, I’ve got a bit of a zombie theme going on for this month and I’ve lined up a series of interviews with a few zombie authors. Today, I’m talking to Grivante, author of The Zee Brothers series. Hi Grivante, tell us about your zombie book…

I’ve loved them since I was a kid and got hooked on the original Dawn of the Dead movie and the Deadworld series of comic books.

This could go one of two ways. Something big and powerful like a Zombear or minuscule like Zom-Ants or other tiny insect. We wouldn’t be able to stay away from them and would have to leave the planet in sterile spaceships to escape them.

Resident Evil 4 and pretty much any COD Zombies game.

Slow. Partly because that’s what I grew up with and I hate change dammit, lol! And partly because if zombies were fast the story would be over on page 2. We wouldn’t survive, they would destroy us, it’s that simple.

The Deadworld Comic by Vince Locke was amazing as a kid. It was one of my first real dives into horror and I loved it.

The original Dawn of the Dead was my first exposure to zombies and I loved it.

I wouldn’t leave home. I live in the woods, sparsely populated, heavily armed, ready to go!

Start with Curse of the Zombie Omelet for a fun read or with the Zombie Exterminators short story included in the Undead Worlds anthology.

He is best known for his Zee Brothers: Zombie Exterminator series, a comedic horror series that both celebrates and pokes fun at everything that makes zombie pop culture cool.

He loves things like George Romeros Of The Dead movies and Robert Kirkman’s The Walking Dead and feels there are tons of authors telling those types of stories well. He’ll leave that type of story telling to them and keep focused on the weird gonzo-action filled tales he likes to write and his readers like to read!