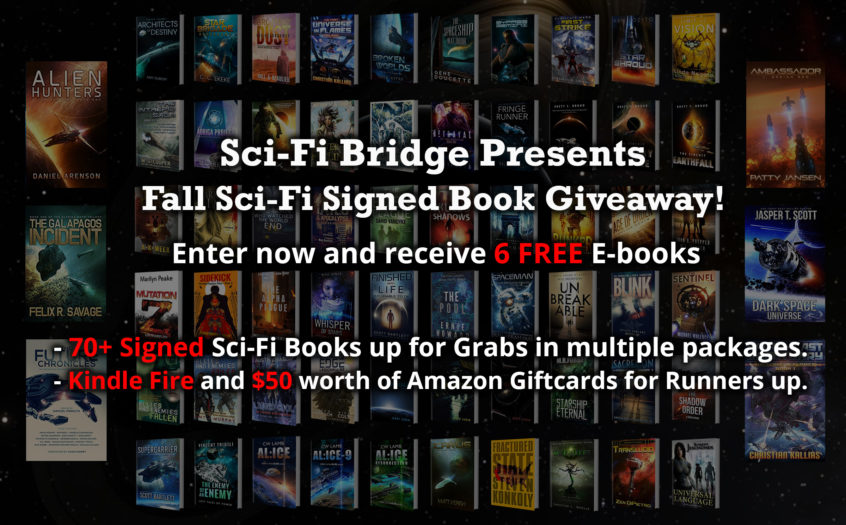 Against my better judgement, I tend to write in all sorts of genres. My upcoming series, Serial Killer Z, is horror, but I’ve also written a lot of science fiction including Glitch Mitchell and the Unseen Planet – my homage to the old Flash Gordon serials. Unseen Planet is currently part of this amazing Signed Book Giveaway from Sci-Fi Bridge. Subscribe to Sci-Fi Bridge for a chance to win a package of signed paperbacks from an amazing collection of bestselling and emerging Sci-Fi authors! Everyone who enters will receive 6 FREE ebooks. 1 Winner will receive 25+ Signed Space Opera/Exploration/First Contact Books. 1 Winner will receive 25+ Signed Dystopian/Post Apolcayptic/Time-Travel Books 1 Winner will receive 15+ Signed Military Sci-fi/Space Marine Books 1 Winner will receive a Brand New Kindle Fire 7 2 Winners will receive a $25 Amazon Gift Card Click Here to Sign Up [Massive Science Fiction Giveaway by Philip Harris first appeared on Solitary Mindset on 14th September 2017]

It’s been a while since I posted anything here – we’ve hit the final stages of the project I’m working on in my day job and things have got very busy. But, despite my absence, my writing streak continues. I’m wrapping up the next draft of the zombie book and during the Christmas break I’ll be working on a new Glitch Mitchell short story that’s going to be in an anthology next year. I was also invited to take part in a series of interviews at the indie focused blog site, The Leighgendarium. It’s called The 12 Leighgendary Days of Christmas and my interview is the last in the series and went up today. It’s a real honour to appear alongside some of the coolest names in indie publishing including Nick Cole, Samuel Peralta and Daniel Arthur Smith so to celebrate, I put together a Leighgendary giveaway featuring thirteen books – one by each of the authors taking part in the 12 Leighgendary Days plus one other mystery book. The giveaway is extremely easy to enter and runs until 8pm EST on December 25th. So, drop by The 12 Leighgendary Days of Christmas and enter. And check out the rest of the interviews while you’re there. In fact, take a wander round the … END_OF_DOCUMENT_TOKEN_TO_BE_REPLACED