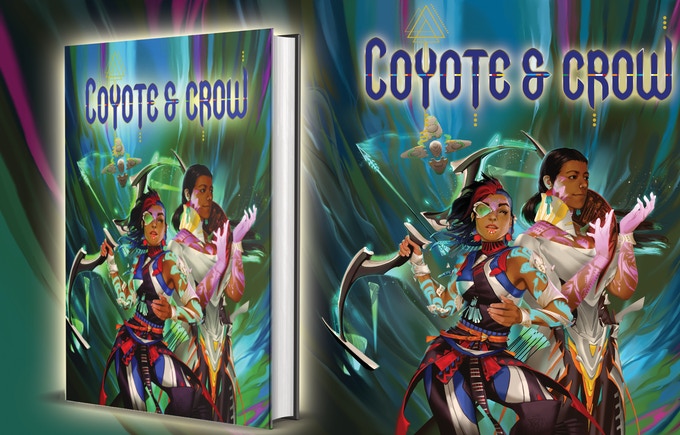 I have a Kickstarter problem.

According to my profile, I’ve backed 237 projects since February 2016 plus 22 that I either dropped out of or were unsuccessful. That’s a lot of projects. Most of the projects I back are book, role-playing game, board game, or video game related but I’ve backed whiskey glasses, wallets, and running gear, too.

Most of the projects have been delivered although the very first project I backed just passed its five year anniversary with no sign of it actually being completed.

I have cut down on the number of projects I back but there are a lot of cool creative things happening on Kickstarter so I thought I’d start highlighting some of the interesting ones here. Hopefully if you back them I don’t need to feel so bad when I succumb and back them as well.

In the words of the team behind the project:

Coyote and Crow is a tabletop role playing game set in an alternate future of the Americas where colonization never occurred. Instead, advanced civilizations arose over hundreds of years after a massive climate disaster changed the history of the planet. You’ll play as adventurers starting out in the city of Cahokia, a bustling, diverse metropolis along the Mississippi River. It’s a world of science and spirituality where the future of technology and legends of the past will collide.

Apart from sounding very cool, Coyote & Crow is created and led by a team of Native Americans representing more than a dozen tribes. And unlike soooo many RPGs, they’ve avoided a dystopian setting and created a positive but not perfect future world to play in.

Coyote & Crow has stormed past its funding goal at this point and there are still several weeks to go. Kickstarter has become a place where a lot of companies come to run preorder campaigns (but that’s a rant for another day) so it’s great to see a passion project come to life, and do so spectacularly well.

This is the most recent project to break my “no Kickstarter” rule, check it out and maybe join me in helping this project come to life.