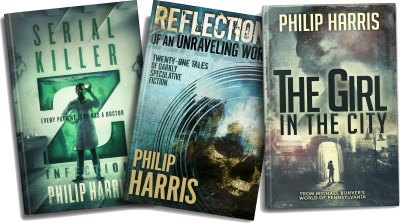 It’s been a while since I posted here. I’ve been distracted by a bunch of things including:

Among all of that I managed to finish draft zero of the next book in my Serial Killer Z series. Draft zero is the first point where I have the story down from beginning to end. It’s still very rough and there will be at least three revision passes before it’s done but it’s down and ready to be mauled into something resembling an enjoyable story. More on that as it progresses. I wrote another couple of stories as well, one for a middle-grade anthology and one for a podcast. No idea if either of them will get accepted but I’m keeping my fingers crossed.

I’ve also updated my newsletter offer. I’m now giving everyone who signs up to my newsletter a short story collection plus two bonus novellas.