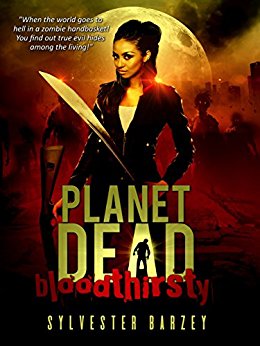 It’s time for another interview with a zombie author. Today, I’m talking to Sylvester Barzey, author of the Planet Dead. Welcome, why don’t you start by telling us about your book…

Planet Dead is my attempt to solve a problem I had with the horror genre. I love horror movies, books, tv shows and comics but as a person of color, I noticed there are very few horror related titles that surround people from different backgrounds.

Most horror movies have a white female lead, who at times starts off weak and comes out strong. Which there is nothing wrong with that, but I wanted a strong female that wasn’t made strong by the horrors she saw, but by the life, she lived. I wanted a person of color so I could show the world people of color are just as strong as any other group. They can be heroes and villains, they can be complex in many ways.

The horror genre leads you to believe that people of color can only die first or be the comic relief. Planet Dead is here to break down that old thought process and give people of color heroes they can relate to, all while giving the world and zombie fans a bad ass story.

So pick it up and see a new face in horror.

I’ve always loved the zombie genre because it gives you a whole world of questions. What would you do if your wife got bit? What happens at a pre-school during the outbreak? What caused it? While the overall theme of The Dead walking is basic, the stories aren’t.

In the zombie genre you can do pretty much anything and dive into your characters on a deeper level than you could with just action or thrillers.

I think it’s because of the possibility of an outbreak happening. Vampires are awesome and werewolves are cool but we know they do exist and that they won’t ever really be the cause of the human race ending.

But a super virus that causes people to go crazy and eat each other? We’re always one bad new story away from that. It feels like it could happen, that and everyone likes to think about a world with no rules.

Zombies are just a modern day cowboys. Everyone loved westerns because they gave you this fantasy of what life was like in the Wild West, where you can be the hero of villain and shows like The Walking Dead & Z Nation do the same.

So in short, zombies are an escape that could likely happen.

Hmm A zombie gorilla? I think that could do a lot of damage. But would a zombie animal need to eat people? Couldn’t it just eat other animals?

Sorry my mind is now on Zombie zoos.

Is this a real question? Resident Evil! But to be specific RE 4 for the game cube. That knife fight! Crazy!

Carl. He’s gotten better but his still an annoy pain in the ass if you ask me. I’ve waited him Dead since he got shot in the woods.

Which two household objects would you combine to make a perfect zombie killing weapon and why?

Who am I, MacGyver? Where’s my shot gun option? Bug spray and a lighter. I can keep the bugs away, start a fire and flamethrower some walkers when the time calls for it.

People going crazy and eating people? I would say some super laced drugs. But people coming back from the dead? No idea, aliens?

Slow if their after me, because it’s not gonna be too hard of a fight. Fast when I’m watching a movie, because you feel more concerned when the hero is being chased down by a track star that a fumbling slow zombie.

Night of The Comet. You don’t hear many people talking about it, but it was an awesome movie. I wouldn’t mind a good remake.

Z Nation is the best zombie tv show. I’ll fight you if you believe other wise and my favorite movie is Day of The Dead the original.

Slow Burn by Bobby Adair was and is my favorite zombie book. When I read that book I was hooked and on the edge of my seat the whole time. It was just one shit thing after another for his hero and I felt for him.

Bobby Adair and his Slow Burn series are amazing! I believe he still have books 1-3 for free, so check them out. And Christopher Artinian, he’s the author of The Safe Haven Series. His books are deeply character based and a breath of fresh air to the genre.