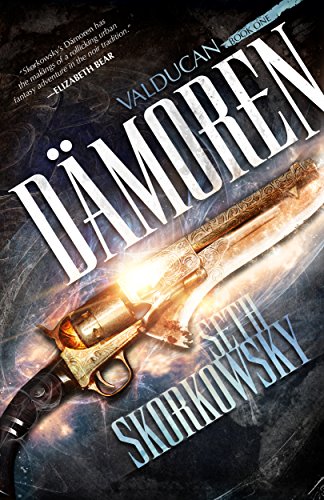 I first discovered Seth Skorkowsky through the Call of Cthulhu RPG videos on his YouTube channel. I’ve been toying with the idea of running some RPG games and Call of Cthulhu is my system of choice so I was hunting around looking for good overviews of the new system, new scenarios etc. Seth’s channel stood out as one of the better ones out there.

He’s got a natural presentation style and manages to be entertaining and informative without ending up with the wacky “trying too hard” feel that so many channels suffer from. Basically, he seems like a guy who enjoys playing and talking about role-playing games.

He’s also an author and although he doesn’t seem to mention his writing often he did give a shout out to his Valducan urban fantasy series. As soon as I spotted that the audiobook was narrated by the legendary R.C. Bray I picked it up and I was not disappointed.

The description for Damoren name checks Supernatural, Hell Boy, and Blade, and if you’re familiar with those then you’re familiar with what the Valducan series is about – a group of knights using holy weapons to hunt down vampires, werewolves, and other demonic entities.

It’s a familiar set up, but it’s well executed. There are enough little twists to the formula to keep things interesting and if, like me, you’re a Harry Dresden fan this is a book that will scratch that urban fantasy itch without feeling like you’re reading Jim Butcher with the serial numbers filed off.

R.C. Bray is as fantastic as ever and certainly helped my enjoyment of Dämoren but as always it’s the characters and the plot that really drew me in. Dämoren has a good, diverse mix of characters, and rattles along at a fair pace without feeling rushed.

It may have just been because of how I discovered Seth Skorkowsky but I definitely got a Call of Cthulhu RPG vibe from this. Not because it’s Lovecraftian (it isn’t) but because I could definitely see the Valducan set up working in a role-playing environment and the first book would make a perfect beginning scenario.

There are a lot of urban fantasy books out there, but Dämoren manages to carve its own niche and I really enjoyed it. Each book in the series is related but standalone. I’m about to finish up the second book, Hounacier, and it doesn’t seem to rely on any knowledge of the first book.

The last Valducan book was published in 2018 and I’m not sure if there are more on the way, but based on my experience with the series so far, I hope there are.

You can grab a copy of Damoren in ebook from Amazon or do what I did and get the audiobook from Audible.