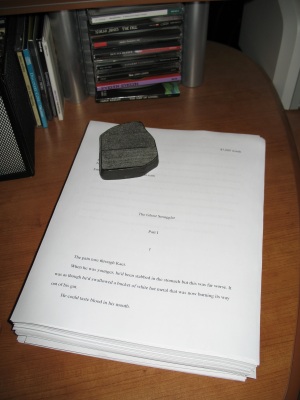 It turns out I was actually working on Draft Number Ten of The Ghost Smuggler, not number nine as I originally thought.

Whichever number it was, I finished it yesterday morning after a final check of a couple of chapters I’d reworked – just to check flow and continuity.

Some stats about Draft Number Ten.

The manuscript is now 169 pages long (single spaced) and comes in at 87,000 words. Yes, exactly 87,000 – weird huh? The double spaced manuscript clocks in at 390 pages. Editing Draft Number Ten took 774 minutes (give or take an hour or so for random digressions onto the Internet) and overall I removed 447 words from the story. That’s probably a good thing.

Next step is to send it off to Jeff VanderMeer who offers a critique service. I’m a fan of Jeff’s writing (in particular the ridiculously inventive Finch) so the opportunity for him to cast a critical eye over my manuscript was too good to pass up.

I was a little concerned that my aging LaserJet would collapse under the strain of printing out the whole manuscript so I batched up the printing to make sure it survived. And survive it did, although I almost ran out of paper – there was only twelve sheets left when I’d finished printing.

Today, The Ghost Smuggler goes in the mail and heads across the border to Jeff.